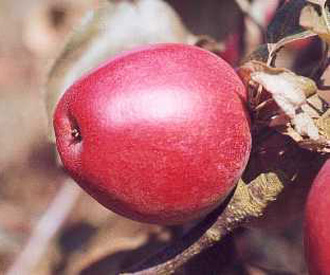 An old American apple dating from the mid 19th Century

Pollination: American Mother is partially self-fertile and would produce some crop without a pollinator but would benefit considerably from a pollinator.  Pollination partners

History and description of American Mother

American Mother arose in Bolton, Worcester County, Massachusetts and was first recorded in 1844. It was introduced to the UK by the famous nurseryman Thomas Rivers. It was popular in the UK in 1920's and 1930's. It received the Award of Garden Merit (AGM) from the Royal Horticultural Society in 1993.

The fruit is medium sized, long conical, ribbed and sometimes lopsided. Deep red flush over a greenish yellow background. The flesh is almost yellow, quite soft and juicy. It is sweet and at best with a perfumed quality. However it can lose flavour quickly after ripening.

Produces an upright tree of average vigour with good scab and mildew resistance. Cropping can be erratic.