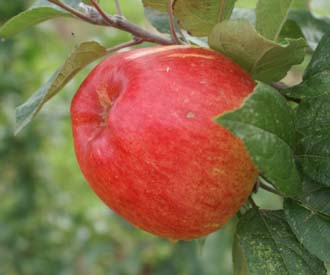 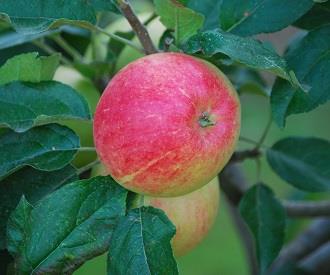 Pollination: Bardsey is self-sterile and would require a pollinator to produce a crop.  Pollination partners

History and description of Bardsey

Bardsey Island known in Welsh as Ynys Enlli is a small Island off the coast of the Llyn peninsula in North Wales. The island has a long history dating back to Celtic times as a place of pilgrimage. In 1998 an ornithologist called Andy Clarke while catch passing birds in order to ring them picked some windfall apples from under a gnarled old tree to use as bait. As the apples looked interesting he took some to his friend Ian Sturrock an expert on old orchards. Samples were sent to the National Fruit Collection at Brogdale in Kent where Dr Joan Morgan the country's leading apple expert and historian declared it as a hitherto unknown variety. Thus Bardsey apple was discovered and named.

It is medium sized round conical fruit which is ribbed and five crowned. It is attractive with bold pink stripes over a cream coloured skin. Useful both as dessert and culinary apple. It has a distinctive lemon scent and a fine refreshing flavour. It cooks to a delicate light fluff needing little sugar.

The original tree and fruit on Bardsley Island were found to have no sign of disease. In particular there was no sign of scab or canker both of which are widespread in the humid climate of North Wales. So far all signs are that Bardsey is resistant to both these diseases.

More information can be found on the Bardsey Apple Website