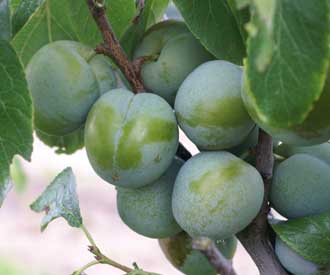 Pollination: Reine Claude de Bavay is self-fertile and a pollinator is not necessary for producing a crop.  Pollination partners

Reine Claude de Bavay was raised by Major Esperens at Malines, Belgium c 1832 from an open pollinated Greengage. Named Bavay in honour of the Director of the Horticultural Station at Vilvoorde. Brought to England by Thomas Rivers c 1846.

Small compact tree. Self-fertile but light cropping like most gages. Can be grown successfully in most parts of the UK but best grown in a sheltered garden or on a south facing wall in colder regions.