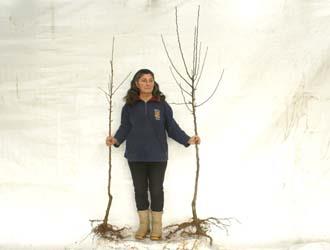 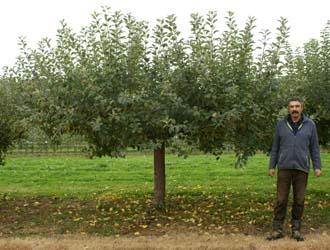 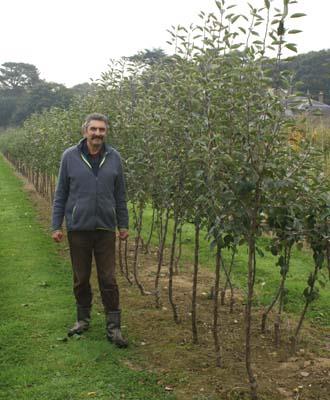 Half standard two year apple trees in the nursery

The half standard is the most popular of the classic open centre goblet shaped fruit tree forms for gardens particularly when the tree forms a feature in a lawn area. It is also very popular form for traditional domestic orchards in a grassed area such as a paddock. The trees are a reasonable size but are not too large to be difficult to manage. In commercial apple growing this form is still used in cider orchards as it allows for the apples to be mechanically shaken off the tree and swept up from under the trees.

The half standard form can be used for all types of fruit trees on a range of rootstocks but it is most commonly used for trees on semi-vigorous rootstocks to produce medium sized trees which are not going to grow more than 4m (13ft) in height and spread when mature. The actual length of the clear trunk is typically 1.2m (4ft).

Before the start of growth in their second year we cut back the centre leader of the maiden trees back to 1.35m (4ft 6in) and remove any lower branches. This results in the development of a head of branches between 1.2m and 1.35m (4ft and 4ft 6in) above ground. At the end of the summer we remove any low branches to give a clear trunk of 1.2m (4ft).