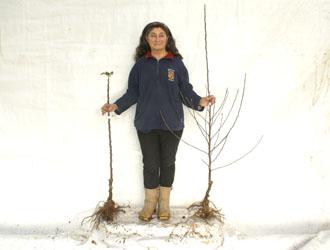 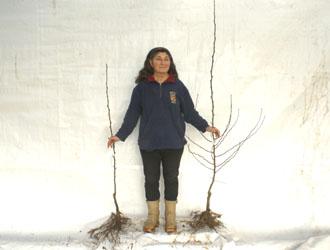 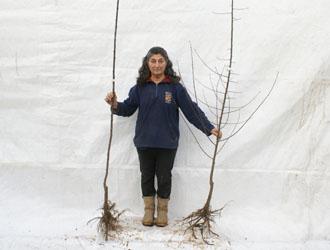 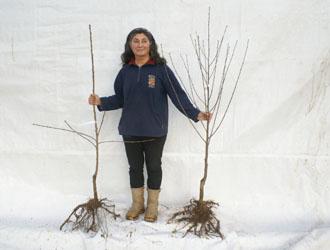 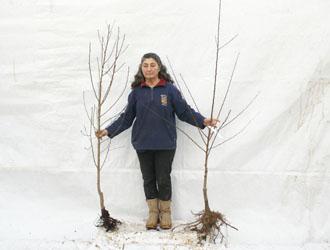 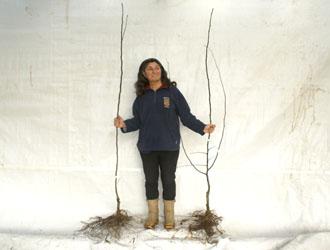 Maiden fruit trees are untrained one year old trees. Unlike two year old trees maidens will have had only very basic essential pruning done on them in the nursery without any attempt to train the tree towards any particular form. In that respect they are a blank canvas that you can use to train into the desired form. However it is important to choose trees on rootstocks suitable for the the form of training and eventual size that you require. It is also important to start formative pruning and training of maiden trees from the time that you plant them.

One year maiden fruit trees are generally much larger than most people imagine them to be. The size and shape varies considerably according to the fruit species, the variety and also the rootstock. The height can range from 0.5m/18 inches for some of the unusually slow growing apple varieties to as much as 3m/10ft for some of the plums. Some maidens have no branches at all and are referred to as maiden whips. Others have branches and are referred to as feathered maidens. The main trunk of the tree is referred to as the centre leader. Feathered maidens will often only have branches on the lower half of the trunk and a branchless leader at the top. The number of branches can vary. Some will have a large number of evenly spaced branches and others a smaller number of unevenly spaced branches. The branches in some will be long and in others short and spiky. All these characteristics are mainly determined by the fruit species and the variety. The rootstock also has some effect. In general maidens on more vigorous rootstocks would be larger and more likely to be feathered than those on more dwarfing rootstocks. Please find below a summary of the main features for the various fruit species.

The size of maiden apple trees ranges from 50cm/18 inches for some unusual very slow growing apple varieties to 1.8m/6ft for the faster growing varieties on the more vigorous rootstocks. Typically a maiden apple tree on the very dwarfing M27 rootstock would be 1m/3ft tall while one on vigorous M25 rootstock may be 1.5m/5ft tall. Feathering can vary enormously as illustrated by the photo at the top of the column opposite. Annie Elizabeth on the left never branches as a maiden while Tydeman’s Late Orange produces many long evenly spread branches on the bottom half of the trunk.

Maiden pear trees are similar to maiden apples except that when grown in the UK both the size and feathering can vary greatly due to our variable weather conditions. Sizes typically range from 1m/3ft for slow growing varieties on the dwarfing Quince C rootstock to 2m/7ft for vigorous varieties on Seedling Pear (Pyrus) rootstock. The photo of pear trees in the column opposite shows a maiden whip of a relatively weak growing variety  Concorde on the left and feathered maiden of a more vigorous variety Onward on the right.

Maiden plums and damson trees can grow very tall in good years. They can reach up to 3m/10ft on the more vigorous rootstocks and we usually have to cut them back to 2m to make handling practical. Typically most of the maidens we supply are around 1.8m/6ft in height although some varieties or trees on the dwarfing VVA-1 rootstock may be shorter. Feathering varies as with apples and pears. But a larger proportion of plum varieties produce maiden whips with no branches at all or with a small number of vigorous branches which are best removed. A few produce feathered maidens with evenly spaced branches. Damsons by contrast always produce feathered maidens with many spiky branches.  Jubileum plum which produces a whip and Shropshire Prune which has the typical spiky branches of a damson are shown in one of the photos in the column opposite.

Maiden cherry trees, particularly on the more vigorous Colt and F12/1 rootstocks are usually very strong sturdy trees. The height can range from 1.3m/4ft for trees on the dwarfing Gisela 5 rootstock to 1.8m/6ft or more for trees on Colt of F12/1 rootstocks. On Colt rootstock nearly all varieties produce well feathered maidens. Trees on other rootstocks, particularly Gisela 5, are usually less well feathered and can sometime be branchless whips. The acid cherries tend to be slightly smaller but much more feathered than sweet cherries. A typical maiden Sunburst sweet cherry on Gisela 5 and Morello acid cherry on Colt are shown in one of the photos in the column opposite.

Maiden peach and apricot trees are usually quite strong trees particularly on the more vigorous rootstocks such as St Julien A and Krymsk 86. Sizes usually range from 1.3m/4ft for peaches on dwarfing VVA-1 rootstock to 1.8m/6ft for peaches on the vigorous Krymsk 86 rootstock. Peaches are usually well feathered with evenly spread branches on almost the whole length of the trunk. Apricot trees are also usually feathered but the branches are much less even and confined to the lower part of the trunk. A typical maiden Peregrine peach on St Julien A rootstock and Goldcot apricot on WA-VIT rootstock are shown in one of the photos opposite.

Maiden quince trees are usually quite large and will typically be at least 1.8m/6ft tall. They will usually be feathered but with branches restricted to the bottom quarter of the trunk. Maiden medlars are nearly always whips. The size can vary considerably from 1m/3ft to 2m/7ft depending on the variety and conditions during the growing season. Typical maiden Westerveld medlar and Isfahan quince trees both on Quince A rootstock are shown in the one of the photos in the column opposite.