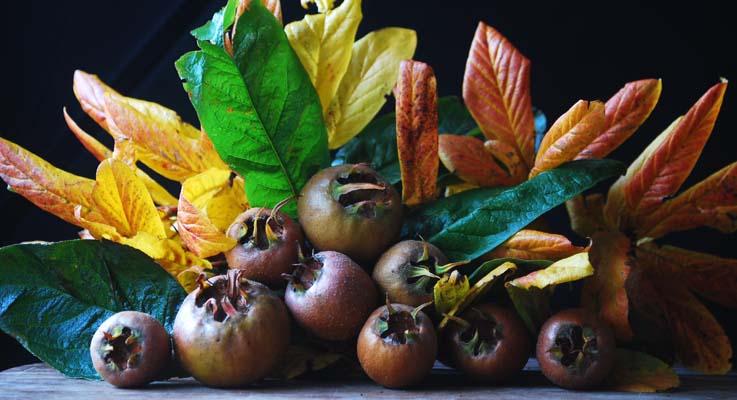 Medlars were at one time a very popular winter fruit in England. However today very few people know about them and then only as fruit used for making jelly rather for eating fresh. The poor medlar it is probably the most misunderstood fruit of all. It is regarded as a curiosity fruit which has to be allowed to rot before being eaten and something that only somewhat eccentric enthusiasts could possibly want to eat. Unflattering and even downright rude references to the medlar in classical English literature including Shakespeare have not helped. But much of this is based on unfamiliarity rather than knowledge about medlars. Here at Keepers Nursery we are keen medlar enthusiasts. We are sure that if you give medlar a chance you will grow to love it as fruit as we do.

Origins and history of medlar

Medlar (Mespilus germanica) is a fruit from the Rose (Rosaceae) family closely related to apple and pear. Despite the botanical name it does not originate in Germany but from the region around the Black Sea and the Caspian Sea in south-west Asia and south-east Europe where it still grows wild. It was probably first domesticated in the Caspian Sea region of northern Iran and Azerbaijan about three thousand years ago. It spread from there to Greece and via the Roman Empire to the rest of Europe. It was important in Roman and mediaeval Europe because it was one of the few fruit available in winter. In Europe its cultivation has almost completely ceased since 17th Century but in other parts of the world such as Iran it is still grown commercially and continues to be a popular winter fruit. Medlar is sometimes confused with loquat Eriobotrya japonica which is a completely different fruit but often sold in shops under the name of medlar.

The medlar fruit resembles a large brown rose hip. It has a very open eye at the flower end giving it a hollow appearance. Some varieties are quite round in shape, some are flat round with a very open eye and others are more conical pear shaped with a more closed eye. The size ranges from 3 to 7 cm in diameter. The skin is a light brown russet and darkens to a dark brown colour as the fruit ripens. The unripe flesh is green, hard and acid but as the fruit ripens in turns brown, sweetens and softens into the texture and taste resembling a dark apple sauce. The fruit contains up to six relatively large very hard pips. Medlars ripen very late. The earliest varieties ripen in early November in the UK but most will not ripen until early December. While all medlars will ripen on the tree if left long enough it is best to pick them before they are ripe. They are easier to pick off the tree when still hard.

The ripening process is sometimes referred to as bletting. Because of the dramatic change in the texture and colour of the flesh bletting is sometimes confused with rotting. For this reason we prefer to avoid this expression altogether and instead talk about ripening. Like any fruit, medlars will rot if left long enough. Like other fruit, the ripening process is an internal physiological process triggered by the fruit itself leading to the breakdown of some of the internal structure and release of juice and sugars. It is quite distinct from rotting which is caused by an invasion of external fungal organisms. The former results in the sweetness and juiciness we associate with ripe fruit, while the latter results in the release of breakdown products which give rotten fruit its unpleasant smell and taste. In this respect medlars are no different to pears which are quite hard when first picked and become soft, sweet and juicy as they ripen. Just like pears you do not have to do anything very special to bring about ripening other than to leave them in a fruit bowl at room temperature. Contrary to the advice sometimes given medlars do not have to be left for weeks in straw or sawdust in a cold place for them to ripen. This is a sure recipe for ending with inedible rotten fruit. You should pick the fruit off the tree as soon as you see the first ones start to ripen. This is easy to see as the whole fruit does not ripen evenly but in patches. You will notice dark patches on the fruit where it has started to ripen. Once picked, keep the bulk of the fruit in a cool place for longer keeping and put some in your fruit bowl to ripen. These will ripen over a few days. Once ripe medlars can be eaten fresh or used to make medlar jelly. Medlars have thin but rather tough leathery skin and you eat only the soft flesh inside. Ripe medlars can also be kept frozen to be defrosted and eaten as fresh fruit during the rest of the year. You should make sure that the fruit is fully ripe before freezing.

Medlar naturally produces a bushy spreading tree with attractive and interesting contorted branches. The long elliptical leaves are a dark green and the bark is a greyish colour. Medlar trees start to come into leaf in early spring from late March onwards depending on location and weather. By contrast the blossom does not open until late May when the tree is already in full leaf. The flowers resemble very large pear blossom. They are star shaped with long pointed white petals and prominent yellow anthers. Medlar trees are tip bearers and bear their fruit at the tip of short branches. This means that there are no clusters of blossom or fruit but single ones spread through the canopy. Medlar trees have spectacular autumn colours. The leaves turn bright yellow and red giving a magnificent display. The size to which the tree grows depends on the rootstock, the growing conditions, and the pruning and training regime. Like most fruit trees medlar trees are grafted on rootstocks. Traditionally they have been grafted on hawthorn (Crataegus monogyna) rootstock. However hawthorn tends sucker heavily and we prefer to use quince rootstocks. We have recently also started using seedling medlar Mespilus germanica rootstock which has better compatibility and produces semi-dwarfing trees. On the semi-dwarfing Quince A rootstocks trees can potentially grow to 12ft (4m) height and 15ft (5m) in spread. On the dwarfing Quince C rootstock they can grow to 10ft (3m) in height and 12ft (4m) in spread. Trees start cropping very young usually when they are no more than 3 years old depending on the variety and rootstock.

Medlar trees are very easy to grow. Like other temperate fruit they require winter chilling to grow and flower properly. But apart from this requirement they will tolerate a wide range of climates and have successfully spread to regions as diverse as south-east Asia to north-west Europe. They grow well, crop well and produce good quality fruit in nearly all parts of the UK. They should always be planted in full sun if possible but will tolerate partial shade. They are very hardy and will tolerate temperatures well below those that may be experienced in even the coldest parts of the UK.  Because they flower very late the blossom is rarely damaged by frost. Ideally they like a well drained slightly acid (pH 6.5) loam soil but will tolerate a wide range of soils except for very alkali or chalky soils. All medlar varieties are self-fertile. They do not require a pollinator to produce fruit but like all self-fertile fruit benefit from cross pollination with other varieties of medlar.

Pruning and training of medlar trees

Like all fruit trees medlar trees require formative pruning for the first few years to produce a well shaped and productive mature tree. Young trees should be supported with stakes for the first few years whilst they establish. The most common forms in which they are trained are the classic open centre goblet shaped bush. Once the basic structure has been developed the main purpose of pruning would be to keep the canopy tidy and open. Because of their bushy growth habit the canopy is prone to overcrowding. It is particularly important to remove vigorous vertical branches in the middle of the tree to keep the centre open. Pruning is best done in dry, frost free weather in late winter. Because medlar trees are tip bearers it is essential to ensure that plenty of small lateral branches are left intact. The fruit buds are usually at the tips of such branches. As tip bearers they are not very suitable for espalier, step-over or cordon training but they can be fan trained.

Diseases and pests of medlar trees

There are no serious pests or diseases of medlar trees in the UK which means that they are easy to grow. Medlar trees are highly susceptible to fireblight. This is an extremely serious and virulent bacterial disease which can kill trees. Fortunately fireblight is relatively rare in the relatively cool conditions of the UK.

Medlar tree varieties that we sell

Unlike most suppliers who offer the one token variety of medlar (usually Nottingham) we offer up to seven varieties. The Iranian Medlar is best variety we supply for eating fresh. It produces a small conical fruit which ripens on the tree in early November. It has very soft juicy texture and a good balance of sweetness and acidity. Westerveld and Royal are two very good later ripening varieties. They produce very sweet medium sized round fruit. Nottingham is the best known variety. It is often said to be the best flavoured of the medlars. While it does have good flavour it also has a tendency to rot because its flat shape and very open eye can cause it to crack. Large Dutch produces a very large attractive fruit but has rather coarse textured flesh and poor flavour. It is best used as a culinary variety.

Medlar tree forms that we sell