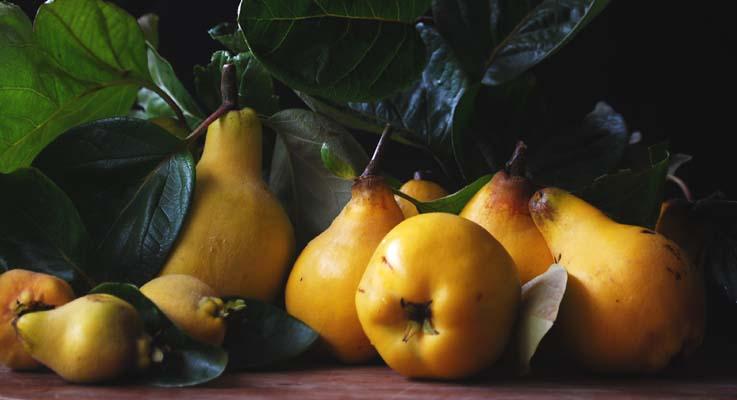 Quince is an ancient fruit which has occupied a special place in many cultures and traditions. What makes it special is the unique fragrance which can fill a room from one fruit in a bowl. A quince trees is an attractive addition to a garden providing attractive blossom in the spring and golden fragrant fruit in the autumn which can be turned into delicious jams and jellies. At Keepers Nursery, we offer probably the largest selection of quince trees for sale anywhere.

Origins and history of quince

Quince (Cydonia oblonga) is a fruit from the Rose (Rosaceae) family closely related to apple and pear. It originates from south-west Asia and was first domesticated in ancient times probably in present day Turkey or Iran. From there it spread via Greece and the Roman Empire to the rest of Europe. Quince may first have been introduced to England by the Romans, but the first known record dates back to about 1275 when King Edward I had some planted at the Tower of London. Throughout history quince has been highly prized as a fruit and regarded to have almost magical qualities. It has been used in many rituals and has been the subject of many mythological tales. Today quince is grown as a commercial crop in countries such as Turkey, China, Morocco and Iran. However the most important commercial use of quince is as a rootstock for pear trees. The semi-dwarfing and dwarfing Malling Quince A and Quince C rootstocks developed at East Malling Research Station in Kent in 1920 are still by far the most widely used rootstocks for pear trees.

Most quinces are pear shaped. Some are shaped like a round conical pear while others are a more elongated pear shape. Some are large and lumpy. A small number are a round apple shape. When ripe the skin is usually golden yellow in colour and often has a downy coat which can be rubbed off to reveal a shiny surface underneath. The flesh colour varies from light lemon yellow to a deep almost orange yellow. Many varieties have hard gritty flesh while others have quite fine textured flesh with the texture of a firm apple. Most varieties are very acid and astringent and not pleasant to eat raw. Some are sweet and not at all unpleasant eaten raw. However quince is really a culinary fruit and even the sweetest varieties are best used for cooking. The best known use is quince jelly or cheese. The original marmalades were made with quince long before the advent of the citrus fruit based marmalades we now have. Acid varieties which break up quickly when cooked and set more easily are the best varieties for this purpose. The fine textured sweet varieties which keep their shape when cooked and develop a deep red colour are the best varieties for making jams, preserves or incorporating into dishes and pies.

Quince naturally produces a bushy spreading tree with an attractive and interesting shape. The mature leaves are a dark green and slightly leathery in appearance and the bark is dark brown. Quince trees start to come into leaf in early spring from early to mid April depending on location and weather. By contrast the blossom does not open until late May when the tree is already in full leaf. The blossom is a pale pink and rather like a very large apple blossom. Quince trees are tip bearers and bear their fruit at the tip of short branches. This means that there are no clusters of blossom or fruit but single ones spread through the canopy. The size to which the tree grows depends on the rootstock, the growing conditions, and the pruning and training regime. Like most fruit trees quince trees are grafted on rootstocks. On the semi-dwarfing Quince A rootstocks trees can potentially grow to 15ft (5m) height and spread. On the dwarfing Quince C rootstock they can grow to 10ft (3m) in height and spread. Trees start cropping when they are 3-5 years old depending on the variety and rootstock.

Quince trees grow best and produce the best fruit in a climate with hot summers and cold winters, in other words the climate of the region from which they originated. Like other temperate fruit they require winter chilling to grow and flower properly. But apart from this requirement they will tolerate a wide range of climates and have successfully spread to regions with such diverse climates as the Mediterranean and northern Europe. In the UK the main problem with growing quince is the lack of summer heat and sun. Poor summer weather can both result in poor fruit quality and poor cropping in the following year. They should always be planted in full sun. They do best in warmer, sunnier parts of the UK. In cooler regions they are best grown in warm sheltered spots. They are very hardy and will tolerate temperatures well below those that may be experienced in even the coldest parts of the UK.  Because they flower very late the blossom is rarely damaged by frost. Ideally they like a well drained slightly acid (pH 6.5) loam soil but will tolerate a wide range of soils except for very alkali or chalky soils. It is often said in folklore that quince trees are best grown near water but in view of the fact that they originate from and are most widely grown in relatively dry regions there is little evidence for this. All quince varieties are self-fertile. They do not require a pollinator to produce fruit but like all self-fertile fruit benefit from cross pollination with other varieties of quince. However even though they are self-fertile fertilisation may be adversly affected by relatively cool conditions at flowering time resulting in fruitlets dropping soon after forming. The fruit should be picked from the tree in early October once the skin has turned yellow. It can be stored in a cool place for a few weeks but the flesh will start to turn brown from inside if stored for too long.

Pruning and training of quince trees

Like all fruit trees quince trees require formative pruning for the first few years to produce a well shaped and productive mature tree. Young trees should be supported with stakes for the first few years whilst they establish. The most common forms in which they are trained are the classic open centre goblet shaped bush or half standard. Once the basic structure has been developed the main purpose of pruning would be to keep the canopy tidy and open. Because of their bushy growth habit the canopy is prone to overcrowding. It is particularly important to remove vigorous vertical branches in the middle of the tree to keep the centre open. Pruning is best done in dry, frost free weather in late winter. Because quince trees are tip bearers it is essential to ensure that plenty of small lateral branches are left intact. The fruit buds are usually at the tips of such branches. Quince trees can also be fan trained against walls and fences. As tip bearers they are not very suitable for espalier, step-over or cordon training.

Diseases and pests of quince trees

There are no serious insect pests of quince trees in the UK. The most widespread disease in the UK is quince leaf blight. This is a fungal disease which causes dark brown spots on leaves which gradually spread and coalesce and can cause premature shedding of leaves and result in weakening of the tree. The fruit can also be affected either by direct infection of the fruit resulting in poor distorted fruit or indirectly by weakening the tree. Unfortunately quince leaf blight is a growing problem in the UK. Quince trees are also highly susceptible to fireblight which is an extremely serious and virulent disease which can kill trees. Fortunately the cooler conditions in the UK do not favour the disease which is relatively rare here. By contrast in the USA quince trees are not grown commercially because of the high risk of fireblight.

Quince tree varieties that we sell

We offer up to fifteen varieties of quince trees for sale. This is probably the largest range available anywhere. They can be classified into three broad categories: sweet, hard fleshed acid and fine fleshed acid varieties. We offer three sweet varieties originating from Iran: Isfahan, Shams and Iranian. All three are quite similar rounded pear shape. They have a sweet fine textured deep yellow flesh which keeps its shape even after prolonged cooking. They can develop a dark red colour when cooked. These varieties require warm sheltered locations for best results. The hard fleshed acid varieties are probably the most familiar type of quince in the UK. The best known varieties of this kind are Meeches Prolific and Vranja. The flesh is quite gritty and astringent. When cooked they break up quickly and develop a pink or orange colour. They are the best varieties for quince jelly and cheese making. Meeches Prolific is by far the most reliable and heavy cropper and the best options for cooler less favourable locations. In our experience Vranja is a much less reliable cropper. Serbian Gold which is believed to have good quince leaf blight resistance and also crops well is another good variety of this type. The fine fleshed acid varieties fall somewhere between the two types above. They have the fine textured flesh of the sweet varieties but are also quite acid. The apple shaped Aromatnaya which falls into this category is quite palatable eaten fresh. The large lumpy Ekmek and the large pumpkin shaped Sobu which originate from Turkey are other interesting variety of this type.

Quince tree forms that we sell

We supply quince trees on two rootstocks: Quince A which is semi-dwarfing and produces a tree of up to 15ft (5m) height and spread and Quince C which is dwarfing producing trees of up to 10ft (3m) in height and spread. We sell the trees either as one year maidens or two year trees trained towards a particular form. Maidens are untrained one year old trees. Maiden quince trees can be more than 7ft (2m) tall, will typically have branches up to about 1m (3ft) above ground and a long branchless leader on top. Like all maiden trees these need to be trained into an appropriate form from the first year when they are planted. Our two year old trees will have had been trained towards an appropriate form. Trees on dwarfing Quince C rootstock will have been trained in an open centre bush form with a clear trunk of 0.9m (3ft). Trees on semi-dwarfing Quince A rootstock will have been trained as open centre half standards with a clear trunk of 1.2m (4ft) and occasionally as bush. We also produce a limited supply of fan trained quince trees on Quince A rootstock. These are suitable for growing on walls and fences with at least 8ft (2.5m) height and spread of 12ft (4m) available.