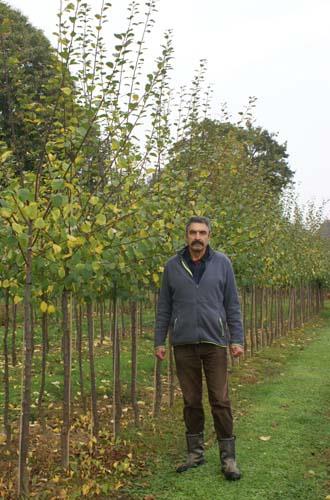 The standard form is the largest of the classic open centre goblet shaped fruit tree forms. Standard fruit trees are large with tall clear trunks and branches above head height. Traditional orchards with trees which were large enough to walk or sit under and required ladders to pick the fruit were common at one time. They often served for both fruit production and grazing of animals, particularly sheep. Today the remains of some of these old orchards can only occasionally be seen in the countryside. While such orchards are no longer viable for commercial fruit production, there has been a revival of interest from enthusiasts planting small orchards of standard trees in paddocks and fields mainly as an attractive feature that also produces fruit.

The standard form can be used for all types of fruit trees on vigorous rootstocks which produce trees growing to a height and spread of more than 4.5m (15ft). Typical standard trees will have a clear trunk of 1.8m (6ft) or more and a head of large small branches spreading 6m (20ft) or more. They grow into large trees and are only suitable as specimen trees in a large garden or a traditional orchard in a field. Practical consideration must also be given to the problems of maintaining such large fruit trees.

We usually only produce standard apple and plum trees but occasionally also have standard pear and cherry trees. Before the start of growth in their second year if the trees have grown sufficiently we cut back the centre leader of the maiden trees back to 2m (6ft 6in) and remove any lower branches. This results in the development of a head of branches between 1.8m and 2m (6ft and 6ft 6in) above ground. At the end of the summer we remove any low branches to give a clear trunk of 1.8m (6ft). While most plum trees will have reached the 2m (6ft 6in) height by the beginning of the second season, many apple trees will not. In the case of these apple trees we allow them to grow on and cut them in early summer. Some of the weaker growing varieties may not reach the necessary height even by early summer. We leave the leader of these trees intact and they are classified as straight leader trees. These trees are ready for training into standards the following year.

Our standard trained trees are on vigorous rootstocks - apples on M25 rootstock, plums on Brompton rootstock and when available pears on Pyrus (seedling pear) rootstock and cherries on F12/1 rootstock.