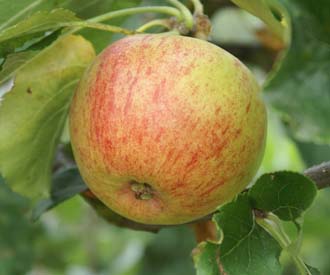 A very good summer dessert apple. Sweet and juicy with some Cox flavour.

Pollination: Laxton's Epicure is partially self-fertile and would produce some crop without a pollinator but would benefit considerably from a pollinator.  Pollination partners

History and description of Laxton's Epicure

Raised by Laxton Bros, Bedford, in 1909 from a Wealthy X Cox’s Orange Pippin. Introduced in 1929. Received the RHS Award of Merit 1931 and won the Bunyard Cup 1929, 1932. A popular garden variety, sweet and juicy combining the flavour of Cox’s Orange Pippin with the bright colour of Wealthy.

A tree of moderate vigour. Heavy cropper. Fruit prone to bitter pit. Like most early cropping varieties the fruit tends to drop quickly once ripe.