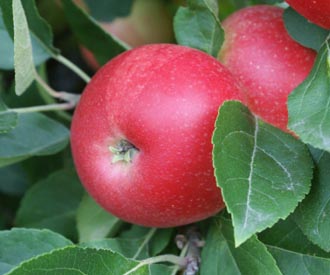 Pollination: Discovery is self-sterile and would require a pollinator to produce a crop.  Pollination partners

History and description of Discovery

Discovery apple was raised about 1949 by a farm worker called Dummer of Langham, Essex, UK from a Worcester Pearmain crossed possibly with a Beauty of Bath. The story is that Dummer had raised a number of Worcester Pearmain seedlings and chose the best one to plant in his garden. As he only had one arm, he needed assistance from his wife. But she broke her ankle and as a result the seedling was left for weeks simply covered by sacking. However, it survived and grew into a tree which produced good quality fruit which kept longer than most very early apples and unlike others did not drop. The tree came to the attention of the nurseryman Jack Matthews of Thurston, Suffolk who bought grafts and marketed the variety under the name Thurston August. It was renamed Discovery in 1962. It has now become the main early commercial variety in the UK.

Medium sized, flat-round fruit. Bright scarlet flush over a pale greenish yellow skin speckled with small russet dots. Attractive looking. Creamy white flesh often stained pink under the skin. Crisp and juicy. Quite good, distinctive, slightly sharp flavour. Keeps very well for such an early variety. Grown commercially and sold in shops it is picked too early and lacks flavour. But if allowed to ripen properly on the tree it develops a beautiful red skin colour which seeps into its flesh and a very good flavour.

Can be a slow growing tree. Partial tip bearer. Good disease and frost resistance. Slow to come into bearing but crops heavily once mature.