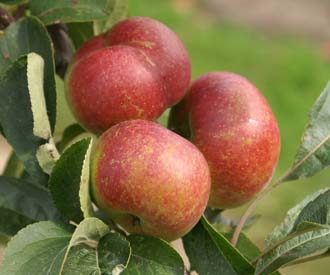 An ancient apple esteemed through the centuries for its decorative qualities.

Pollination: Api is self-sterile and would require a pollinator to produce a crop.  Pollination partners

History and description of Api

Api is a very old variety possibly originating from the ancient Forest of Api in Brittany, France. First recorded by Le Lectier in France 1628. Highly regarded as a decorative apple. Grown in Europe, particularly France, from the 17th Century onwards. Grown in North America, where it was known as Lady Apple, in the 19th Century. Still grown on a small scale in France and USA.