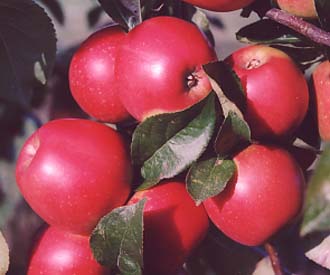 A very attractive apple with bright red and yellow colours. Crisp and sweet with good flavour.

Pollination: Autumn Glow is self-sterile and would require a pollinator to produce a crop.  Pollination partners

History and description of Autumn Glow

Autumn Glow is an apple we found at the nursery but have been unable to identify. It was so good that we have adopted it.

The fruit is medium-large oblong-conical in shape. When fully ripe the skin has a fiery red flush over a golden yellow background. Very crsips and juicy cream coloured flesh. Sweet flavour with a distinct fruity undertone. The fruit hangs well on the tree and is best picked as late as possible to allow the colour and flavour to develop fully. It keeps well retaining its flavour and texture. The tree is of moderate vigour, crops well and appears to show good disease resistance.