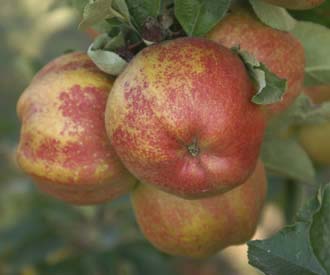 A very old English apple variety thought to have been grown in Cornwall for centuries.

Pollination: Cornish Aromatic is self-sterile and would require a pollinator to produce a crop.  Pollination partners

History and description of Cornish Aromatic

Cornish Aromatic apple was first described by Sir Christopher Hawkins in 1813 but thought to have been in Cornwall for many centuries.

A handsome, medium sized, round-conical to oblong-conical fruit, ribbed and very distinctly five crowned. Dry skin, greenish-yellow, half flushed dullish red with broken, short darker red stripes. Variable amounts of russetting, which in some years may be limited to small russet dots and in others may comprise of large ochre russet patches covering much of the surface and producing a pretty patterns with the underlying red flush . White flesh with greenish tinges, firm and rather dry. Has a fine aromatic, almost spicy flavour in good years but may lack flavour in poor years.