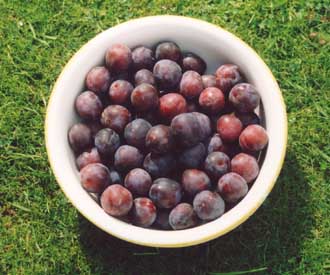 A good dual purpose plum which lives up to its name by being both early and very prolific.

Pollination: Rivers Early Prolific is partially self-fertile and would produce some crop without a pollinator but would benefit considerably from a pollinator.  Pollination partners

Early Proficic plum was raised by Thomas Rivers, Sawbridgeworth, Hertfordshires c 1820 from an open pollinated Precoce de Tours. Awarded a First Class Certificate by the RHS in 1895 it became established as a commercial variety in the UK.

Small to medium sized, round to oval fruit. Blue-black skin with a lavender bloom. Golden yellow, firm, juicy flesh. Free stone. Rich damson-like flavour. Can be sharp but usually quite sweet and pleasant as a dessert plum when fully ripe. Good as a cooking plum particularly for jam.

Small tree with pendulous habit. Branches tend to be slender and twiggy and are liable to break under the weight of a heavy crop. Cropping is good and often heavy. Will tollerate shade.