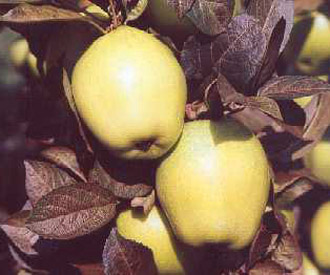 Pollination: Golden Spire is self-fertile and a pollinator is not necessary for producing a crop.  Pollination partners

History and description of Golden Spire

Found in Lancashire in about 1850. Introduced by Richard Smith, nurseryman, of Worcester. In Gloucestershire, where it was grown as a cider apple, it is known as Tom Matthews. Quite widely grown in the late 19th century and also recommended as a decorative tree due to its weeping habit.

A tree of weak vigour with a weeping habit. Heavy cropper.