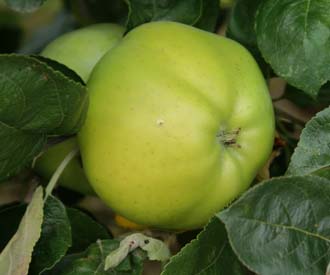 One of the best known of the early cooking apples.

Pollination: Grenadier is partially self-fertile and would produce some crop without a pollinator but would benefit considerably from a pollinator.  Pollination partners

History and description of Grenadier

English variety of unknown origin. It was first recorded in 1862 and was exhibited in 1863 by the nurseryman Charles Turner of Slough. Awarded a First Class Certificate by the RHS in 1883. It was promoted by the nurseryman George Bunyard of Maidstone and became established as the most widely grown early cooking apple in the UK.