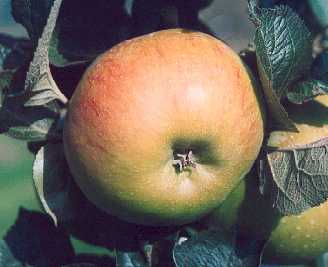 Pollination: Bramley's Seedling is a self-sterile triploid and would require a pollinator to produce a crop.  Pollination partners

History and description of Bramley's Seedling

The original Bramley's Seedling tree was raised by Betsy Brailsford in her cottage garden at Southwell, Nottinghamshire, UK 1809-1813. The tree came to the notice of the nurseryman Henry Merryweather c 1857, who named the variety Bramley's Seedling after Mr Bramley who owned the cottage garden at the time, and introduced it in 1865. It received a First Class Certificate from the RHS in 1883 and was soon adopted by commercial growers. It has since become by far the best known and widely grown culinary apple in the UK.

Irregular, large, flat-round fruit. Green to greenish yellow skin with some brownish orange flush and red stripes. Commercially grown fruit is usually plain green because it is picked before the colour develops. White, green tinged, juicy flesh. Cooks to a pale cream puree. Its strong acidity and flavour have made Bramley's Seedling by far the most popular English cooking apple. Very good keeping quality retaining much of its acidity and flavour until the spring. Bramley's Seedling is widely used for cider making and also produces excellent sharp tasting juice.