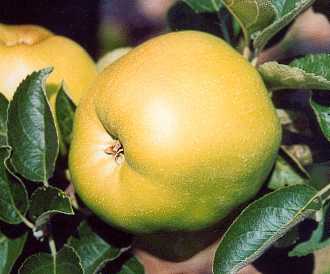 Pollination: Lord Derby is partially self-fertile and would produce some crop without a pollinator but would benefit considerably from a pollinator.  Pollination partners

History and description of Lord Derby

Raised by by B W Witham, a nurseryman from Stockport, Cheshire, UK. First recorded 1862. It is believed by some to be a Catshead seedling. It was grown commercially in Egnland in the late 19th Century. It still remains a popular garden variety particularly in northern England and Scotland.

Large, round-conical fruit with pronounced ribs. Bright green skin turning yellow. Occasional slight pinkish brown blush. Soft, rather dry, white flesh. Good for pies as it keeps some of its shape when cooked. Strong sharp flavour requiring some sugar when cooked. Loses acidity and flavour in storage and is best used before it turns yellow.