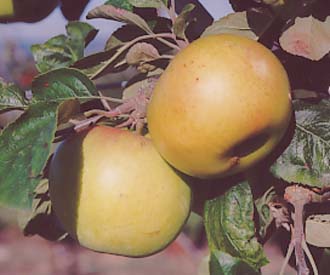 An old cooking apple originally from Scotland and once widely grown throughout the UK.

Pollination: Stirling Castle is partially self-fertile and would produce some crop without a pollinator but would benefit considerably from a pollinator.  Pollination partners

History and description of Stirling Castle

Stirling Castle apple was raised in the 1820's by John Christie, a nurseryman who also kept a toy shop at Causey Head, near Stirling, Scotland. Introduced by Drummonds Nursery, Stirling. First recorded in 1831. Widely grown in the 19th century. Fell out of favour with commercial growers in the 1920-30's when it was found to be damaged by lime sulphur sprays which were widely used at the time. Still a popular garden variety in the North and Scotland.

A tree of weak vigour with attractive blossom. Heavy cropper.