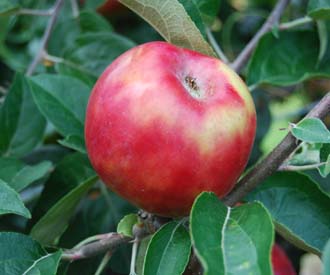 An old dual purpose apple with a distinctive savoury flavour popular in Scandanavia and Northern Europe.

Pollination: Gravenstein is a self-sterile triploid and would require a pollinator to produce a crop.  Pollination partners

History and description of Gravenstein

An old European variety which according to some sources arose in the 1600’s in the garden of Duke Augustenberg, Castle Graefenstein, Schleswig-Holstein. Other sources trace its origins to an apple called Ville Blanc imported to Northern Europe from Italy or South Tyrol. Introduced in England in the 1820’s and sent from London Horticultural Society to Massachusetts and Nova Scotia. Introduced to California by Russian settlers by the 1820’s. Still grown in Canada and California and continues to be valued in Northern Europe, where it is Norway’s most popular apple.