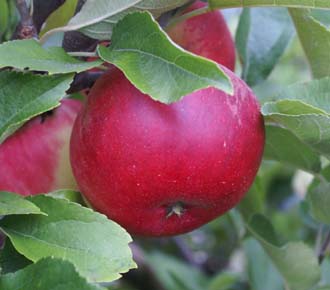 Pollination: Worcester Pearmain is partially self-fertile and would produce some crop without a pollinator but would benefit considerably from a pollinator.  Pollination partners

History and description of Worcester Pearmain

Raised by Mr Hale of Swan Pool, St Johns, Worcester, UK. Believed to have been a Devonshire Quarrenden seedling. Introduced by St John's Nursery 1874. Received a First Class Certificate from the RHS in 1875. It soon became established as the main early commercial variety in England and continues to be grown commercially on a relatively small scale.

Medium sized, round-conical fruit. Often lopsided. Bright red flush almost completely covering the smooth yellowish green skin. White, firm but tender, juicy flesh. Very sweet. Flavour can be variable. At its best a lovely sweet intense strawberry flavour but rather plain at other times. Does not keep well. The fruit should be left on the tree for as long as possible for the flavour and colour to develop and eaten soon after picking.