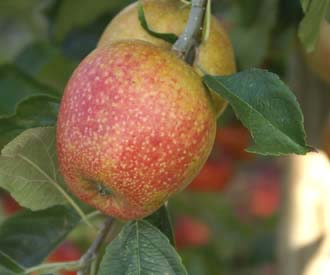 A handsome apple with an unusual conical shape and a dry nutty flavour.

Pollination: Adams Pearmain is self-sterile and would require a pollinator to produce a crop.  Pollination partners

History and description of Adams Pearmain

Adams Pearmain is an old English variety of uncertain origin. It was first brought to notice in 1826 by Robert Adams who had obtained the variety from Norfolk and referred to it as Norfolk Pippin. Other sources believe that it originated in Herefordshire where it was known as Hanging Pearmain. It was a popular commercial variety in Victorian England because of its handsome appearance.