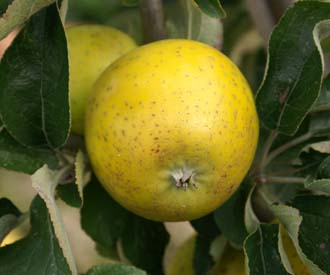 A small golden apple with a strong sweet-sharp pineapple flavour.

Pollination: Ananas Reinette is self-sterile and would require a pollinator to produce a crop.  Pollination partners

History and description of Ananas Reinette

Ananas Reinette is an old variety probably of Dutch origin first recorded in 1821. Formerly grown in Germany where it was popular as a dessert and culinary apple as well as for juice.