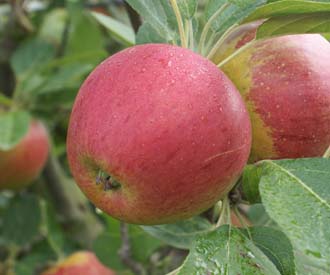 A sweet dessert partially self-fertile apple with the aromatic flavour of Cox.

Pollination: Laxton's Superb is partially self-fertile and would produce some crop without a pollinator but would benefit considerably from a pollinator.  Pollination partners

History and description of Laxton's Superb

Raised from Wyken Pippin x Cox's Orange Pippin by Laxton Bros, Bedford, UK 1897. Received the RHS Award of Merit 1919 and First Class Certificate 1921. Introduced in 1922. Became established as a commercial variety in the UK, but declined after it was found that trees developed a biennial tendency as they aged. Still grown commercially on a small scale. A popular garden variety.

Medium sized, round-conical fruit. Purplish red flush and stripes over a greenish yellow skin. Some russet patches. White, crisp, juicy flesh. Sweet but with variable flavour. In a good year it has much of the aromatic qualities of Cox but in poor years it may lack in flavour. Keeps quite well.