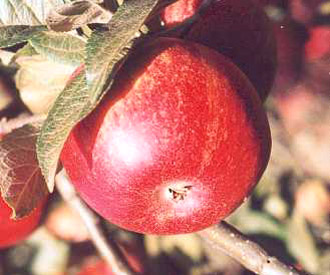 Pollination: Charles Ross is partially self-fertile and would produce some crop without a pollinator but would benefit considerably from a pollinator.  Pollination partners

History and description of Charles Ross

Raised from Peasgood Nonsuch x Cox's Orange Pippin by Charles Ross, gardener to Capt Carstairs of Welford Park, Berkshire. It was originally named Thomas Andrew Knight after the famous pomologist. It received an Award of Merit from the RHS in 1899. It was renamed in the same year and received a First Class Certificate from the RHS as Charles Ross. Formerly grown on a small scale in the UK. A very handsome, prized exhibition variety.