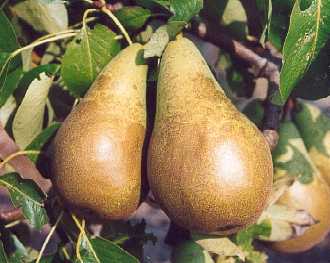 Pyrus communis
The most widely grown pear in the UK. Suitable for most locations and partially self-fertile.

Pollination:  Conference is partially self-fertile and would produce some crop without a pollinator but would benefit considerably from a pollinator. Show suitable pollination partners

A guide to choosing Pear Trees

History and description of Conference

Raised by Thomas Rivers, Sawbridgeworth, Hertfordshire, UK from an open pollinated Leon Leclerc de Laval. This variety took its name from the National British Pear Conference of 1885 where it was exhibited. It is by far the most widely grown variety in the UK. It is also grown in continental Europe.