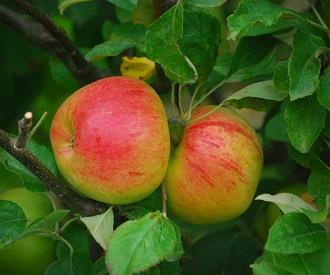 Pollination: Bountiful is self-sterile and would require a pollinator to produce a crop.  Pollination partners

History and description of Bountiful

Large fruit. Orange-red stripes over green skin. Mild flavoured flesh keeps some of its shape when cooked. Sharpness mellows in storage and can be used as a dessert apple.