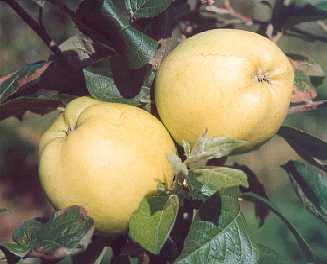 Pollination: Keswick Codlin is partially self-fertile and would produce some crop without a pollinator but would benefit considerably from a pollinator.  Pollination partners

History and description of Keswick Codlin

A very old Northern English variety which according to Robert Hogg in his The Fruit Manual was found "growing among a quantity of rubbish behind a wall at Gleaston Castle near Ulverstone" in Lancashire. It was introduced c 1790 by a Keswick nurseryman called John Sander, who named it Keswick Codlin. It was one of the most popular early cooking apples in Victorian England and was grown commercially in Kent and around London up until the 1930's.