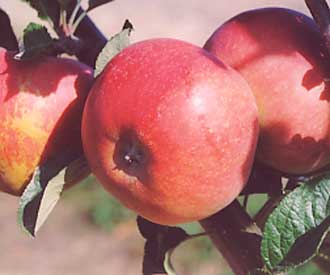 An excellent dessert apple similar to Cox but redder in colour and sweeter in taste.

Pollination: Kidd's Orange Red is self-sterile and would require a pollinator to produce a crop.  Pollination partners

Kidd's Orange Red was raised from Cox's Orange Pippin x Red Delicious by J H Kidd, Greytown, Wairarapa, New Zealand in 1924. Introduced to the UK in 1932. Received the RHS Award of Merit in 1973. Grown commercially in New Zealand and to a small extent in the UK.

Medium sized, round-conical fruit. Crimson flush over a green skin ripening to yellow. Variable amounts of ochre russet patches. Creamy white, firm, juicy flesh. Excellent aromatic flavour not unlike Cox but sweeter. Should be left on the tree for as long as possible for the flavour to develop. Subject to coarse russetting. Stores well holding both its texture and flavour.

Moderately vigorous, free spurring tree. Good cropper but fruit may need to be thinned to avoid small size. Attractive blossom. Prone to canker and not suitable for wet locations.