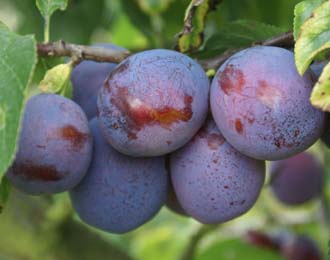 Pollination: Marjorie's Seedling is partially self-fertile and would produce some crop without a pollinator but would benefit considerably from a pollinator.  Pollination partners

History and description of Marjorie's Seedling

Found by G W Layley at Hillfoot Farm, Beenham, Berkshire, UK in 1912 and introduced in 1928. Adopted and still grown as a commercial variety in the UK.

Medium large, oval-oblong fruit. Bloomy, blue-black skin. Firm and juicy, greenish yelow flesh. Clinging stone. In a good season it can be very sweet and good as a dessert plum. Can be lacking in flavour and colour in a poor season. Good for cooking. Fruit hangs well on the tree until the first autumn frosts.