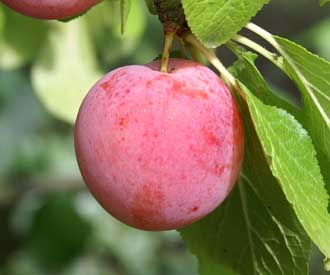 Pollination: Reeves is self-sterile and would require a pollinator to produce a crop.  Pollination partners

History and description of Reeves

Reeves pum was found by A Reeves of Chilliwack, British Columbia, Canada and introduced c 1940.

It is a large, round, with pale reddish purple purple fruit. It has firm yellow flesh and a free stone. Good flavoured. Although traditionally regarded as a culinary plum it is also good as a dessert plum. Heavy cropper.