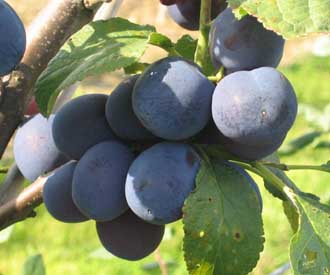 One of the most popular cooking plums. Excellent colour and flavour.

Pollination: Czar is self-fertile and a pollinator is not necessary for producing a crop.  Pollination partners

History and description of Czar

Czar plum was raised from a cross between Prince Englebert and Rivers Early Prolific by Thomas Rivers, Sawbridgeworth, Hertfordshire, UK in 1871. As the Russian Emperor was on a visit to the UK at the time the variety was named Czar in his honour. It became an established commercial variety in the UK and elsewhere in Europe.

Compact hardy tree suitable for most parts of the UK and areas subject to spring frosts. It is also suitable for locations with heavy and acid soils.It tollerates shade and can be grown on a North facing wall. Heavy reliable cropping. Large attractive blossom. Susceptible to Silver Leaf.