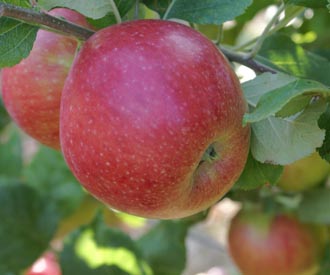 Pollination: Newton Wonder is partially self-fertile and would produce some crop without a pollinator but would benefit considerably from a pollinator.  Pollination partners

History and description of Newton Wonder

The original seedling is said to have been found growing in the thatch of the Hardinge Arm inn at King's Newton, Melbourne, Derbyshire, UK c 1870 by the innkeeper Mr Taylor. He planted it in his garden where it survived until the 1940's. Parentage is not known for certain but is believed to be a Dumelow's Seedling Blenheim Orange cross. The variety was introduced by Pearson & Co of Nottingham in 1887 and was awarded a First Class Certificate by the RHS in the same year. Has been grown commercially in the UK in the past and still is on a very small scale. A popular garden variety.

Very large, flat-round fruit. Greenish yellow skin covered with orange red flush and red stripes. Firm, juicy, creamy yellow flesh. Good flavour but not as sharp as Bramley. Cooks to a cream coloured fluff. Good as a baking apple. Good keeping qualities. Can be used as a brisk eating or a salad apple in the winter.

Vigorous, spreading tree. Resistant to scab and canker but susceptible to mildew and bitter pit. Heavy cropper but with a biennial tendency. Suitable for growing in northern Britain.