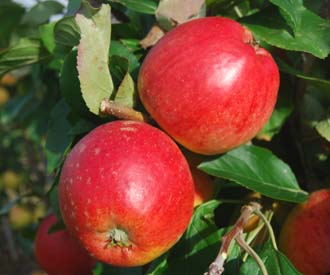 An attractive new dessert apple with an intense sweet-sharp Cox like flavour.

Pollination: Nuvar™ Cheerfull Gold™ is self-sterile and would require a pollinator to produce a crop.  Pollination partners

Nuvar™ Cheerfull Gold™ was raised in Staplehurst, Kent UK in 1979 from an open pollinated Cox's Orange Pippin. Subsequent DNA testing done in 2009 has shown the pollinator to have been Golden Delicious. It displays some of the qualities of both these varieties. It was released as a new variety in 2011.

Medium sized, round conical fruit, slightly ribbed, five crowned and occasionally lopsided. Crimson flush and stripes over a yellow skin background. When fully ripe the skin is almost completely crimson. The flesh is cream coloured with a firm crisp texture. It is juicy with an intense sweet sharp flavour similar to but less aromatic than Cox's Orange Pippin. It is a late ripening variety with excellent keeping quality.

Relatively vigorous, tip-bearing tree. Heavy cropper. The fruit hangs well on the tree. Experience so far indicates that it has low susceptibility to common diseases such as canker, scab and mildew. Should prove to be a useful garden variety.

More information can be found on the Cheerfull Gold Website