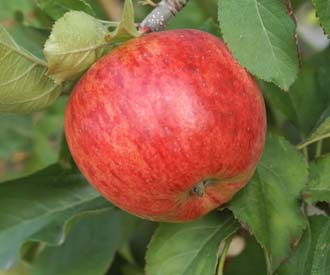 Pollination: Topaz is self-sterile and would require a pollinator to produce a crop.  Pollination partners

History and description of Topaz

Topaz is a small to medium sized, slightly ribbed flat round apple. It has an attractive appearance with bright red stripes and flush over a yellow background. The flesh is yellow, crisp and juicy with a tangy sharp flavour. It ripens late and keeps very well. The tree has a compact habit and spurs freely. It is a heavy cropper. It has very good scab resistance and some resistance to powdery mildew.

Topaz is one of the best garden variety particularly for those who prefer sharper flavoured apples. Its compact habit makes it particularly good for small gardens.