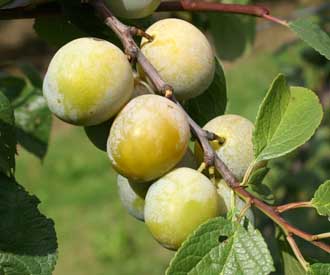 Prunus domestica
The most popular of the greengages considered by many as the finest gage.

Pollination:  Old Greengage is self-sterile and would require a pollinator to produce a crop. Show suitable pollination partners

A guide to choosing Plum Trees

History and description of Old Greengage

Greengages are believed to be very old and to have come to Western Europe from Armenia. They are believed to have been introduced to France during the reign of Francois I (1494-1547) where they were given the name Reine Claude after his wife. Greengages probably first arrived in Britain from Italy as the first records dated 1629 refer to them as Verdoch, a name derived from the Italian Verdocchia. They were later named Green Gage after Sir William Gage who introduced them from France sometime before 1724 and planted them in his garden Hengrave Hall, Bury St Edmunds. Greengages have been the most highly prized plums throughout Europe and have been widely grown ever since their introduction.

Trees are of moderate vigour. Cropping is regrettably light and unreliable in the UK. The crop is also prone to wasp attack.