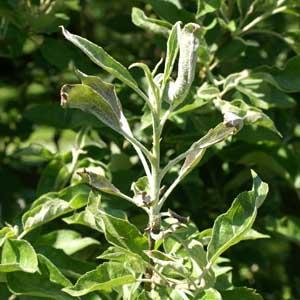 Powdery mildew is a widespread and potentially serious disease of apples trees and to a lesser extent of pears trees. It is most serious in the drier parts of the UK

Powdery mildew can infect leaves, blossom and fruit. Infections on leaves are most common and appear first as a whitish felt-like patches of fungus on young leaves usually on the lower surface. As the fungus spreads it can cover both sides of the leaf.  Infected leaves have stunted growth, are narrow, folded along the length and become become brittle as they age. Often the whole of the growing tip of a branch is infected and covered in a silver-grey mat of fungus causing serious stunting and distortion of growth. Infection in flower buds results in deformed blossom and a reduced fruit set. In some cases the infection may be passed on to the fruit resulting in small heavily russeted fruit.

The disease is caused by a fungus called Podosphaera leucotricha. The fungus overwinters in dormant buds on the tree. In the spring the infection spreads to the leaves or blossom as they open. This primary infection produces air borne spores which in turn produce secondary infections in young leaves elsewhere. This process can repeat itself several times during the growing season. As only very young leaves are susceptible, new infections cease once the summer growth has come to an end. By that stage the fungus has infected buds ready for the whole cycle to restart the following spring.

Chemical control of apple and pear powdery mildew requires regular spraying with a suitable fungicides, none of which are currently available to amateur growers. However, a considerable amount of control can be achieved by removing sources of infection. During winter pruning look for, remove and destroy infected tips of branches which are going to act as sources of primary infection. These can be identified by their stunted growth and remnants of the white powdery fungus. During the growing season infected shoot tips are easy to spot and should be removed and destroyed. Different varieties of apple and pear vary in their susceptibility to this disease. Problems with powdery mildew can be minimised by choosing varieties which are resistant to the disease.  There are many excellent resistant varieties available. These include dessert varieties such as Ashmeads Kernel, Discovery, Egremont Russet, Ellison's Orange, Kidds Orange Red, Tydeman's Late Orange and cookers such as Bramley Seedling, Lord Derby, Reverend W Wilks. You can use our advanced search for a full list of resistant varieties.