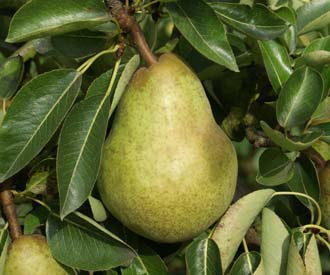 Pyrus communis
Probably the best known and most widely grown pear throughout the world.

Pollination:  Williams Bon Chretien is partially self-fertile and would produce some crop without a pollinator but would benefit considerably from a pollinator. Show suitable pollination partners

A guide to choosing Pear Trees

Originated before 1770 in the garden of a schoolmaster called Mr Wheeler in Aldermaston, Berkshire, UK. His successor in the garden Mr Stair sent grafts to Richard Williams, a nurseryman at Turnham Green, whose name was given to the variety in 1814. It was imported into the USA towards the end of the 18th century where in 1817 Enoch Bartlett gave it the name Bartlett. It has since become the most widely grown commercial pear throughout the world. It is not only one of the most popular dessert pears but also the most widely used pear for canning.

Moderately vigorous, spreading tree. Heavy, reliable cropper. Fruit must be picked promptly when ready as it is prone to rotting from the core.