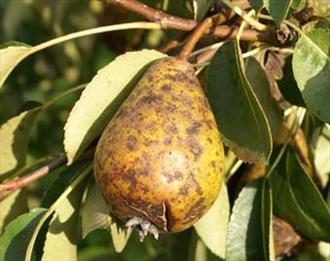 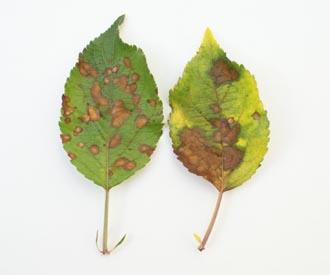 They are the most economically significant diseases of apple and pear trees worldwide. Serious outbreaks of scab can be devastating for commercial growers causing severe damage to the appearance of the fruit  and rendering much of the crop unacceptable to most retail outlets. In addition scab can cause premature loss of leaves which weakens trees. Scab occurs in most apple and pear growing regions but is most serious in wet regions.

Scab can infect leaves, fruit, blossom, young shoots as well as other parts of the tree. The most obvious symptoms are seen on the leaves and fruit. Infections on leaves appear as blotches of dead leaf tissue which turn brown in the case of apples and black in the case of pears. Infected leaves have stunted growth and are often distorted. They eventually turn yellow and drop prematurely. Heavily infected young leaves may shrivel up completely and fall very quickly. Similar brown or black blotches appear on infected young fruit. As the fruit matures these blotches become corky and the skin cracks giving rise to the typical scab-like fruit symptoms which give the disease its name. Infected fruit is usually also small and misshapen. Although the fruit may be very unsightly it is still perfectly edible as only the skin is affected.

Apple scab is caused by a fungus called Ventura inaequalis. Pear scab is caused by a closely related fungus called Ventura pirina. The fungus overwinters in dead infected leaves and fruit on the ground, and less commonly on infected shoots on the tree. In spring around the time of bud burst air borne spores are released which land on young leaves, blossom or fruitlets infecting them. Once these primary infections are established they in turn release more spores which are spread by wind or rain splash to young leaves elsewhere giving rise to secondary infections. This cycle repeats itself several times during the growing season. Spores can only germinate and infect if the leaf surface is wet and the fungus grows best in relatively humid conditions. Consequently the disease develops mainly during wet weather and is most serious in wet regions.

Chemical control of scab requires regular spraying from bud burst through the entire growing season with suitable fungicides. Commercial growers will use a series of different fungicides with different modes of action to avoid build up of resistance. However none of these fungicides are currently available to amateur growers. A certain amount of control can be achieved by removing sources of primary infection by sweeping up and destroying infected dead leaves and fruit in the autumn. Infected young shoots are another source of primary infection which should be cut off and destroyed in the course of winter pruning. These can be identified by the coarse and cracked appearance of their bark. However, by far the most effective method of organic control is to grow fruit varieties which are resistant to scab. This is particularly important in wet regions where it is important to avoid susceptible varieties altogether. There are many excellent resistant varieties available. These include older established dessert varieties such as Adams Pearmain, Ashmeads Kernel, Discovery, Egremont Russet, Ellison's Orange, Kidds Orange Red, Sunset, Tydeman's Late Orange and cookers such as Lord Derby, Reverend W Wilks. There are also a number of new varieties specifically bred for scab resistance. Of these we would highly recommend two new Czech varieties Rajka, Rubinola and Topaz both for disease resistance, and quality of fruit. You can use our advanced search for a full list of resistant varieties.