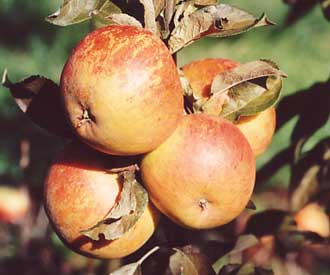 Regarded as the finest of English apples with an intense aromatic flavour rarely matched by any other.

Pollination: Cox's Orange Pippin is self-sterile and would require a pollinator to produce a crop.  Pollination partners

Cox's Orange Pippin was raised by a retired brewer called Richard Cox at Colnbrook Lawn, Slough, Buckinghamshire, UK c 1825. Believed to have been a Ribston Pippin seedling. Introduced by Smales & Son, Colnbrook c 1850. Was first grown commercially c 1862 by Thomas Rivers in Hertfordshire. More extensive planting around London and in Kent followed until disease problems led to its decline in the early 1900's. Commercial planting was revived after the introduction of lime sulphur sprays in 1920's. It has since become the most widely grown dessert variety in the UK. It is also grown in NewZealand and continental Europe. Received an Award of Merit and a First Class Certificate from the RHS in 1962.

Moderately vigorous tree. Rather susceptible disease. Unsuitable for colder and more humid regions, or for organic cultivation. A very difficult variety to grow. Less experienced gardeners would be well advised to substitute Cox with alternative varieties such as Sunset or Ellison's Orange which are much easier to grow.